When Herby Dauphinet, a retired oil field worker from Many, Louisiana, and his son-in-law, David Thompson, idled their boat away from the launch at Cypress Bend the morning of March 27, they had no idea that in a few short minutes they would have a 10.79-pound monster largemouth bass in their boat.

The men were fishing the Dylan Kyle Poche Memorial Bass Tournament that takes place annually on Toledo Bend. The tournament is held in remembrance of Poche, a young man from the area whose life was taken in tragic circumstances 5 years ago.

Although Dauphinet had fished other tournaments on Toledo Bend, he had never fished this one.

Dauphinet and Thompson began the day fishing United Bay, a spot they know well because it’s close to where one of the men lives. They liked the layout: a little bit of grass and plenty of good structure.

Dauphinet started with a 3/8-ounce Humdinger spinnerbait thrown from a Shimano-Falcon, rod and reel combination that he likes.

He cast once, and reeled the spinnerbait back to the boat. Dauphinet was fishing shallow water; he could see the dull strobe of the spinnerbait as he retrieved it. He cast a second time. Nothing.

Dauphinet placed his third cast right up against the trunk of a cypress tree.

“[The bass] was totally against the cypress about a foot and a half deep,” he said. “When I flipped the spinner, I let the lure sit for a second or two, and when I moved it, that’s when she grabbed it and started ‘walking’ away with it.”

What he means by ‘walking,’ is that the fish didn’t hit the lure hard. Dauphinet thinks that she was trying to move it off the bed. She grabbed it as soon as he began to work the lure away from the cypress tree. But he didn’t know that he’d hooked a bass at first.

“I thought I hooked a Gou (freshwater drum),” Dauphinet said, because the fish was flashing white in the murky water. 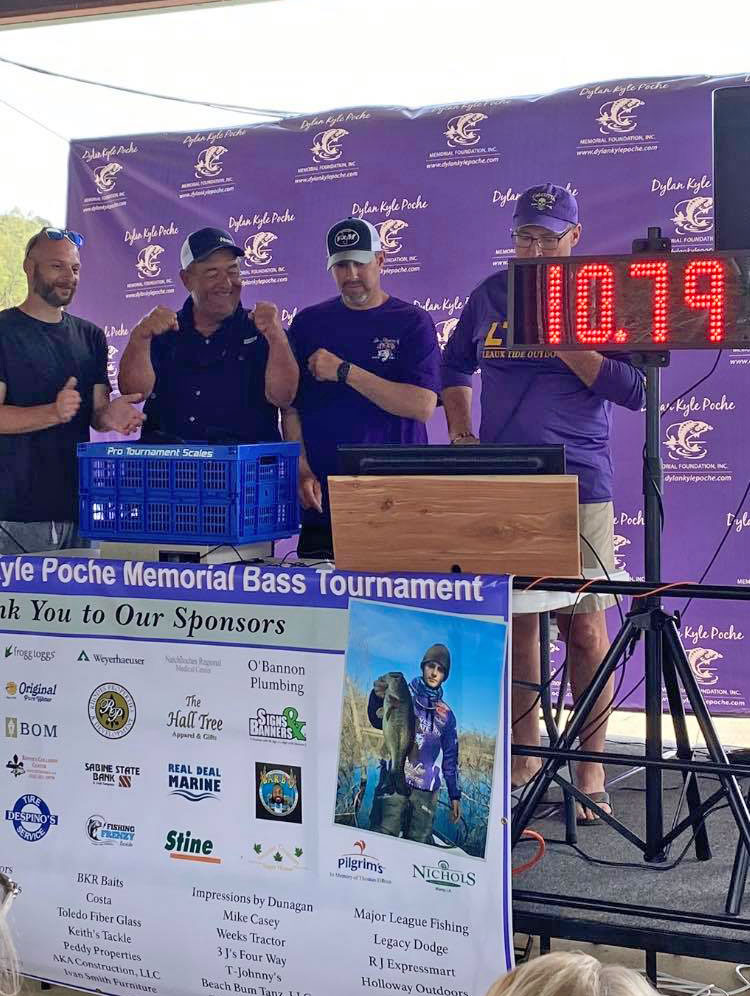 But what Dauphinet had on the end of his line wasn’t a gaspergou. No sir. When he set the hook, the bass rolled hard to her side, showing her white belly. In the murky water it didn’t look like a bass. “But when she flipped back over….”

“I didn’t have to play her for very long. She gave up quick,” he said. “The whole thing was done in a couple of minutes.” Thompson scooped up the bass with the net, and then she was in the boat.

As the men celebrated the impressive catch, Dauphinet happened to check the time. It was 6:50. The tournament had started just five minutes ago.

The fish was the biggest of the tournament at 10.79 pounds. The runners-up weighed 9.81 and 9.53 pounds, respectively. After it was certified, Dauphinet’s beautiful bass was entered into the Toledo Bend Lake Association’s Lunker Bass Program. Like all fish in the program, it was released back into the reservoir. Herby Dauphinet will receive a replica fish to commemorate the impressive catch, as well as bragging rights that will pay out for the rest of his life.